Endovelicus is a deity Iron Age worshiped in pre-Roman Lusitania. God of medicine and security, both solar and chthonic character, after the Roman invasion his cult spread throughout most of the Roman Empire, subsisting through its identification with Aesculapius or Asclepius, but has always remained popular in the Iberian Peninsula , more specifically in the Roman provinces of Lusitania and Betic. 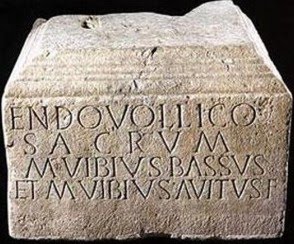 Endovelicus has a temple in San Miguel Mota, Alentejo, Portugal, and there are numerous inscriptions and ex-votos dedicated to him in the National Museum of Ethnology. The cult of Endovelicus survived until the fifth century until Christianity spread in the region. 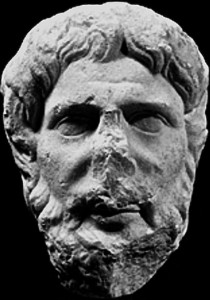 There are two shrines dedicated to God Endovelicus, who have been primitive, located in Rock Mine and a second later this situated on top of the hill of S. Miguel da Mota, both in Alandroal county.

The Shrine of Mine Rock, is very simple and primitive, Manuel Calado describes the shrine as rock implanted in a rocky spur with abrupt slopes, the living area is greatly reduced. The stairs and floors carved in the rock are recurring elements in a relatively high number of pre-Roman shrines, some of which Romanized, and are often interpreted as sacrificial altars. This type of monuments is known in the Spanish Meseta and in northern Portugal, in areas that have experienced a stronger Celtic influences.

The sanctuary of San Miguel Mota, whose name is due to the fact that with the implementation of the Catholic religion on the peninsula pagan worship God Endovelicus have been replaced by the cult of St. Michael, it is a temple of the Roman era. As you know, the Romans throughout their Romanization process in addition to bring their culture and religion to people who would romanizando were also enjoying and absorbing the local cults. So Endovelicus, was also a god worshiped by the Romans as evidenced by ex-votos found in this sanctuary.

It seems that São Miguel Mota is an “invention” of the Romans, and that the Mine Rock is a sanctuary of a Celtic god.

The Lóios Convent and Pousada dos Lóios – Inn, in Évora

Ecotrail of Montado, Path between Torre da Gadanha and Montemor-o-Novo

Tower of the Esporão, in Reguengos de Monsaraz